Get fresh music recommendations delivered to your inbox every Friday.
We've updated our Terms of Use. You can review the changes here.

A Moment To Reflect Vol​.​3 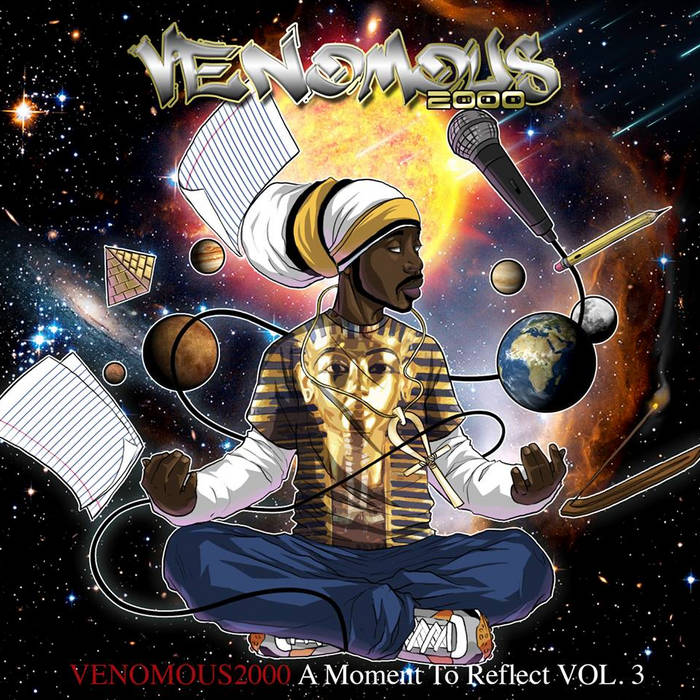 World Of Light Media Venomous is a top notch emcee, a veteran

ABOUT THE RELESE :-
A Moment to Reflect 3 is a walk through the world of Hip-Hop, where the elements have seemed to be forgotten. Riddled with loads of similes & metaphors, this compilation of international sounds and features provides listeners with a glimpse of the worldwide appeal that Hip Hop has established. The age of lyrics, beats, & cuts is still alive and well. This project was assembled with the intention of showcasing producers & emcees from Serbia, Germany, England, Sweden, Canada, Japan, Norway, Belgium, France, and the United States. Venomous2000's appeal spans the globe, literally! Venomous approaches every track with the cadence and command of a master Emcee! With emcee features by London's very own Juga Naut & Scorzayzee; France's Sanai, New Jersey's very own Fel Sweetenberg & Mr. Fickle, The Formulis, Twylight; Chicago's Thaione Davis AMTR3 is a raw, fun, witty straight Boom Bap journey into the world of this New Jersey native. Venomous2000's flow is undeniable over production by Japan's Repeat Pattern, France's Matnez & Phalo, Trinidad's Boogie Brown, Germany's MecStreem, Indianapolis's Chopzilla, & Boston's DJ Manipulator. Paying homage to Hip Hop legends such as, KRS-ONE, Big Daddy Kane, Wu-Tang Clan and more, the Ultra Emcee is sure to have you wanting to inspect some of his previous and/or future works for certain! We discovered Venomous2000 first with the release of a previous project by #MASSACR, which Venomous is a part of. We decided that a full release project through Pragmatic Theory would be a wonderful way to provide Venomous2000 the just due platform that he deserves.

ABOUT THE ARTIST :-
Born and raised in the same city as NFL great Craig 'Ironhead" Heyward and Hip-hop emcee 7shawn (World Reknown), Passaic, New Jersey, Venomous2000 has been a force for positivity in the Hip-hop culture for over 15 years.  Venomous2000' early beginnings started with his uncle who used to be a radio DJ for the famous New York City WBLS 107.5FM radio station. Venomous2000 received his first tastes of Hip-hop during the early 80's with notables such KRS-ONE, RAKIM, MC Lyte, and Public Enemy. Venomous2000' cousin, Irocdis, was co-founder of the Tommy Boy Records recording artists Deadly Snakes, who gave Venomous lots of inspiration during the sessions that he would stop by and watch them perform and work on music.  The name Venomous2000 was actually started by the Deadly Snakes influence due to the vast amount of time spent in their studios in South Jersey and Philadelphia.  He wanted to make sure that his cousin's vision of the fight against negative music (poison) was met with anti-venom (positivity) so hence the name Venomous was established.  He would later add "TheUltraEmcee & 2000" to separate any affiliation with the rap group The Deadly Snakes.  Venomous met with his first rhyme partner, DeadEye during his years in High School. He would later link with fellow Passaic emcee Danny-D and work on his first demo tape in 1997.  During this same time, Venomous2000 was at a recording session in Paterson, NJ and met another local group called World Affiliated (Phonetic, Nalm Myerz).  The 3 emcees chemistry worked well together and they eventually moved on to form a rap group called The Formulis. During the years with the Formulis, Venomous2000 did extensive performances in the NY, NJ, and PA areas.  The group still performs and does music together, but Venomous2000 is now focused on his solo career development.  Venomous2000 has released 4 solo projects with features by Inspectah Deck, John Robinson, El Da Sensei, Cymarshal Law, LIFElong, Smif N Wessun and more.  Venomous2000 has toured Canada & Europe (France, Belgium) with the So Fresh So Hip-hop 2012 Euro Tour.  He was honored to share stages with Immortal Technique, Chip-Fu, Keith Murray, and Afu-Ra.  The experience and connections established in Europe has broadened Venomous2000 catalog as he looks to return to Europe for a 2014 Europe tour.